We Are Your Criminal Defense Firm

What You Need To Know About Cell Phone Tracking

Posted By The Law Office of Guillermo Lara Jr.

Law Enforcement & Cell Phone Tracking: When Communication is Not So Private

Smartphone technology has permanently changed the way that people stay connected with one another. But like all advances in technology, there have been some unintended consequences. As criminals find new ways to exploit this technology, law enforcement agencies are also finding themselves searching for new ways to keep up. In the process, however, they have raised a few questions about whether their methods go too far. One of the most eyebrow-raising methods involves the use of cell-phone towers to track mobile phone activity.

Cell-phone towers are operated by service carriers and give signal strength to mobile phones. To communicate, every cellular phone must first establish a connection with a tower. These towers appear more frequently, though sometimes more discreetly, in urban centers but can be found easily driving down the highway in rural areas. When it comes pursuing and prosecuting criminals, the information that is gathered from cell-phone towers can be used in two ways. 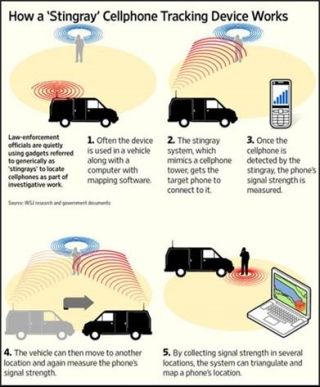 First, law enforcement officials can request "tower dumps" from the tower operator. Tower dumps enable officers to locate the tower nearest to where a crime took place and request all data transmitted through the tower during a set period of time. This data might include the numbers of all incoming and outgoing calls as well as internet data usage. Surprisingly, this process only requires a judicial order with a lower evidentiary burden than an actual search warrant in accordance with the Electronic Communications Privacy Act of 1986. See 18 U.S.C. § 3121.

Second, law enforcement and prosecutors can use cell-phone towers to argue that a defendant was in a particular place at a particular time. This is not the same as using the GPS coordinates on a cell phone, which itself presents distinct legal issues and, at the very least, requires probable cause. Rather, prosecutors have relied on a cellular phone's connection with a particular tower to implicate defendants in crimes that took place within the general reach of the cell-phone tower. This strategy has had limited success. Some experts have rightly disputed the reliability of this strategy which in at least one case went so far as to place a defendant in a particular home within a tower's service area. At best, this strategy can only show that a defendant's phone was in the tower's general vicinity. But the service areas of some towers can extend as much as twenty miles in each direction.

The latest approach of law enforcement agencies to track mobile devices is raising a new set of privacy concerns. The "Stingray" is a device about the size of a briefcase that acts as a mobile cell-phone tower. It is manufactured by the Harris Corporation, a Florida telecommunications company, and was originally designed for use by law enforcement in emergency situations. However, there is a growing concern that the device is now being used for general surveillance purposes. Although they do not have the expansive range capabilities as normal cell-phone towers due to their size, they can still intercept data from nearby cellular phones including text message and call logs. Moreover, Stingrays can determine the location of mobile devices with greater accuracy due to their limited range.

Transparency about how law enforcement officials use the Stingray device is one of the biggest concerns of privacy advocates, but even more troubling could be the fact that even when the device is being used in a permissible manner (i.e. to catch criminals) it still indiscriminately tracks the cellular phone data of anyone who happens to be in the area. The current trend toward general surveillance seems to be on course to face enough opposition that statutes such as the Electronic Communications Privacy Act will have to be updated to be relevant to today's smartphones. Recent cases such as Riley v. California, which established that the digital contents of a phone are protected by the Fourth Amendment, are steps in the right direction, but they stop short of preventing law enforcement from tracking mobile phone activity in other ways.

Have questions about cell phone tracking or how this technology can apply to a criminal case you find yourself involved in? Attorney Guillermo Lara, a San Antonio based criminal defense attorney can explain. With a strong data and scientific background, he can apply his experience to help reduce or eliminate charges you are facing. Find out more by speaking with our legal team.